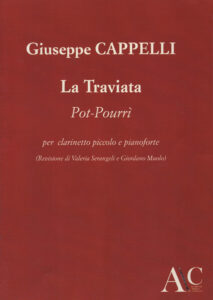 Giuseppe CAPPELLI, born around 1830 and died after 1906, is part of that group of composers and revisers, active in the nineteenth century, for whom it was common use and fashion to develop variations and paraphrases on the themes of the most famous operatic compositions of the time The Second Pot-Pourri varied by G. Cappelli, published in Milan by Ricordi in 1885, is part of the collection “Piccoli Pezzi above motifs by G. Verdi” and contains 7 compositions for small clarinet or clarinet with piano accompaniment . The piece, with a decidedly brilliant character, opens with the reworking of the choir “Largo al quadrupede” from III Atto, the famous aria of the tenor “De’miei bollenti spiriti” from II Atto, followed by a virtuoso cadence of the solo clarinet.
The orchestral introduction to the duet “Dell’invito trascorsa è già l’ora” from I Act and the cabaletta “Oh mio rimorso! Oh infamia”, still from the II Act, connected by a further small cadence to the final tail virtuosistica, complete the Pout-Pourri. The work of revising the clarinetist part was mainly based on the contribution of articulations and dynamics in order to make the execution as close and possible to the original bel canto tradition, suggesting, at the same time, a differentiated and variegated interpretation deriving from the structure of the piece, based on rather repetitive thematic phrases, especially in the brilliant finale. The guide of the main instrument to the piano part (originally devoid) has also been inserted, thus making the reading and the overall execution more effective. Finally, some incorrect notes were corrected and a fingering of the left hand of the piano accompaniment was more appropriate for a correct articulation of some difficult octaves.