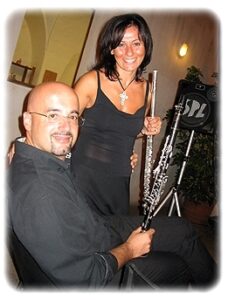 Born in 1970, he studied Clarinet with Maestro Cornelio Martina at the “Tito Schipa” Music Conservatory in Lecce. He carried out a Master Class with Maestro Alessandro Travaglini and, in Rome, the annual course of specialization with Maestro Valeria Serangeli (I Clarinet of the Teatro Carlo Felice of Genoa) with which he edited the review of the Pot Pourrì of “La Traviata” written from the nineteenth-century composer Giuseppe Cappelli for E-flat clarinet and piano. The review, recorded by Valeria Serangeli herself, was published by the AIC (Italian Academy of Clarinet) Editions and presented on the CD Italian Souvenir, on the occasion of the CLARINET FEST 2013 held in Assisi in July of the same year. He has been part of several chamber ensembles and has collaborated with the International Orchestra of the Magna Grecia of Taranto, Orchestra Festival Paisiello Taranto. He has won numerous national and international competitions.
He held, as a teacher, at the Academy of Music of Tirana, a Master Class for teachers and students of the Clarinet classes. He carries out intense didactic activity and solo concert and in various chamber ensembles in Italy and abroad. He has two record productions: “AA.VV.” with ArmoniEnsemble Guitar Trio (2014), “Miniatures” with ArmoniEnsemble Piano Trio with Farelive label (2016). He holds the clarinet professorship at the Istituto Comprensivo “F.G. Pignatelli “from Grottaglie (TA) and from the A. 2009/2010 Clarinet teacher at the “Archita” Lyceum of Taranto.